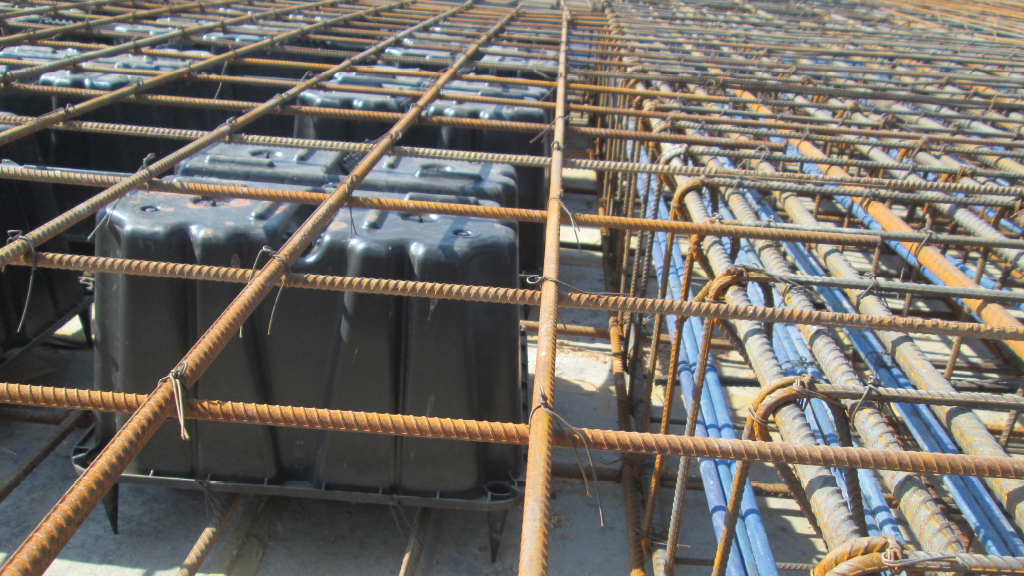 This is a project of a community hall for Shaktidham Temple in Aurangabad, having total area of 6,340 sq. ft.

The primary requirement was to have a flat plate slab without any obstruction so that an exposed slab can be achieved without applying much finishes.

In order to construct a flat plate slab for such long span and considering slab thickness, RCC slab was not an advisable option. Hence we suggested PT voided slab wherein PT will reduce section sizes by controlling deflection and voids will further reduce concrete mass at supports.

A post-tensioned two-way void slab was laid in a column free area measuring 51 ft. x 61 ft. with a grid of five hidden beams (beams having depth same as that of slab depth and hence aren’t visible from underneath), as a result forming a two-way spanning flat plate of 480mm total virtual thickness. The void slab is made to rest directly on 14 peripheral columns; 4 at corners and remaining 10 on the side edges. U-boots each of size 520mm x 520mm x 280mm are used to create voids.

Adoption of void slab provided a flat bottom and resulted in considerable reduction of concrete to 117 cubic meters which would otherwise have been 138.6 cubic meters for any regular slab (without voids). This reduction in concrete volume plus reduced reinforcement caused overall reduction in self-weight of slab resulting in lighter floor. Reduction in self-weight of the slab and provision of hidden beams, eliminated the need of providing columns in the interior area.

Hence, even by using less materials, the structural integrity remains intact and the overall cost is reduced. Also the primary requirement of clear headroom space is achieved.

This project helped in concluding that I-sects system is helping in matching up the architectural aspects without compromising structural design requirement.